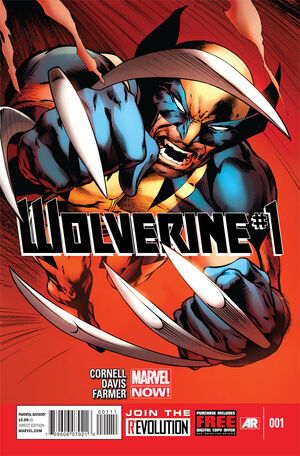 IT’S HUNTING SEASON! The best there is at what he does gets an all-new on-going! Pay attention very closely: there’s a mystery here that even Wolverine hasn’t sniffed out yet. When Wolverine finds himself the bargaining chip in a hostage situation, he must make a decision to save a little boy that will follow him forever…literally! How can a berserker fight what he can’t see? And how far will he go to assert his humanity in the face of the Unknown? Find out when superstars Paul Cornell (CAPTAIN BRITAIN AND MI:13, Doctor Who, Action Comics) and Alan Davis (AVENGERS, CLANDESTINE, EXCALIBUR, UNCANNY X-MEN) take on the Wolverine!

Retrieved from "https://heykidscomics.fandom.com/wiki/Wolverine_Vol_5_1?oldid=1645117"
Community content is available under CC-BY-SA unless otherwise noted.