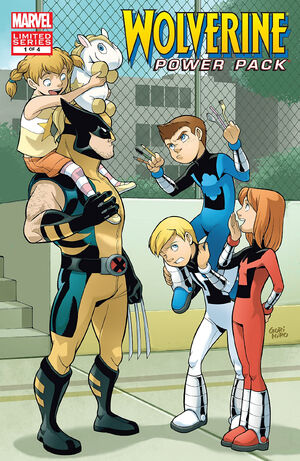 I've got a report on prehistoric life to write first. Too bad my teacher isn't going to believe a word of it...

Appearing in "A Fight at the Museum"Edit

Synopsis for "A Fight at the Museum"Edit

Wolverine fights with Sauron in a museum. The Power Pack arrives, and Wolverine asks them to help him deal with Sauron. Instead, they turn on him and start attacking Wolverine at Sauron's command. The team shields Sauron, and Wolverine charges at them with his claws out.

An hour earlier, the Power family visits the museum. Alex studies the dinosaurs for his school report, although Jack does not seem all that enthused about the bones. Dr. Lykos invites them to his lecture, promising that they could get the opportunity to see a real live dinosaur if they attended.

Soon, the Power kids find themselves in the lecture as Dr. Lykos drones on about the Savage Land. He calls Alex to the stage to be his "special volunteer." Dr. Lykos absorbs Alex's energy and the rest of the Power Pack attacks the professor to save their brother. The man rapidly transforms into a pterodactyl and calls himself Sauron. He casts a hypnotic spell on the children. While riding on his motorcycle, Wolverine notices people running out of a museum, screaming about some monster. Wolverine decides to investigate.

In the present, the Power Pack surrounds Wolverine, who escapes with some quick maneuvering. He throws a dinosaur bone at Zero-G, causing the whole T-Rex skeleton to collapse and snapping the kids out of their hypnosis. The Power Pack direct all their energy at Sauron, knocking him down. Mass Master imprisons Sauron in a dinosaur skeleton and Wolverine offers them to visit Xavier's Institute. Alex, however, first has to write his history report.

Retrieved from "https://heykidscomics.fandom.com/wiki/Wolverine_and_Power_Pack_Vol_1_1?oldid=1473024"
Community content is available under CC-BY-SA unless otherwise noted.