Start a Wiki
Part of the 'Wonder Girl: Champion' event 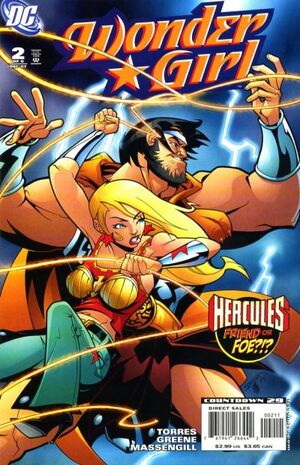 So, I'm employing the Mirror of Circe... but apparently, all I needed was a pair of glasses to fool the mortals.

Wonder Girl and Hercules team-up to fight a pack of strange lion-like creatures. During the battle, Hercules attempts to endear himself to his "sister", but Cassie wants nothing to do with him. She still judges him for once enslaving the Amazons of Themyscira, but Hercules counters her accusation by pointing out her own involvement in the recent Amazon attack on Washington. He also cites her dwindling relationship with Princess Diana and Donna Troy.

Cassie tries to get on with her life, but Hercules continues to follow her, pleading with her to help him on some mysterious emergency. Disguised as a courier, he even gives her a new set of Amazonian battle dress. Later that same day, Cassie finds herself embroiled in a fight against a wandering Cyclops. Hercules shows up moments after she defeats the creature. He again chastises her for her failure to assist him and the two begin fighting. He tells her that something threatens the very existence of the Gods themselves. In the midst of arguing, a Boom Tube opens overhead and the Female Furies emerge ready for battle.

Retrieved from "https://heykidscomics.fandom.com/wiki/Wonder_Girl_Vol_1_2?oldid=1474139"
Community content is available under CC-BY-SA unless otherwise noted.