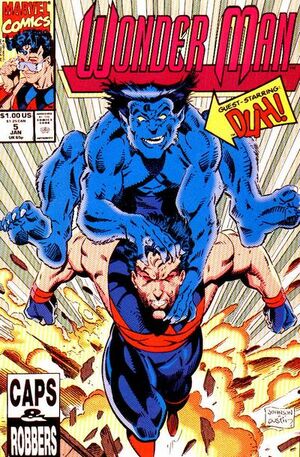 That's what my fair super hero was saying to me...that I had the honor of being around to remember great deeds...spectacular wins and harrowing failures... It's not just that I will never die... It's that, because of me...they will never die. And every year I will come to this place...to this Great Wall...and I will light the watchtowers...every year, on the anniversary of Ladyfair's passing...to remember that this wall was built as a means of defense, as those heroes were defenders...and to remember that sometimes even the most formidable walls -- like the walls we build around ourselves -- can be overcome...if someone is just willing to look at it...and wonder what's behind it.

Retrieved from "https://heykidscomics.fandom.com/wiki/Wonder_Man_Vol_2_5?oldid=1468116"
Community content is available under CC-BY-SA unless otherwise noted.