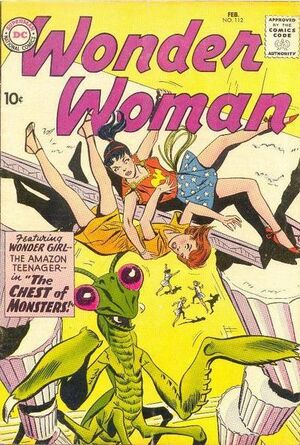 Appearing in "The Chest of Monsters"Edit

Synopsis for "The Chest of Monsters"Edit

With a special television broadcast featuring Wonder Woman, Steve Trevor tries to pull Diana Prince to go and watch it in the audience. In order to get out of it, Diana quickly races away and changes into Wonder Woman and pretends to "cut in" on herself, knowing that Steve would forget about Diana now that her alter ego is there. During the television broadcast, Wonder Woman announces a contest that a boy or girl has the opportunity to win a secret prize if he or she is voted the person who best upheld American ideals in being helpful to others.

After a long search across the entire country, the winner turns out to be one Bonnie Bates, a young girl who selflessly saved the life of a pair of young children who's row boat was smashed during a shore, going so far as to successfully perform CPR to revive one of them. At the award ceremony, Wonder Woman reveals to Bonnie the prize that she has won: She can ask three wishes of Wonder Woman that she will try to full fill.

The first wish Bonnie asks for is to see and experience life on Paradise Island, and so the next day Wonder Woman takes Bonnie in her invisible jet to Paradise Island where she is welcomed with full honors and gets to dine amongst the Amazonians and is named an honorary Amazon. When Wonder Woman asks Bonnie what her second wish is, the young girl hasn't made up her mind yet, so Wonder Woman shows her around Paradise Island while she thinks. When putting on an athletic display where Amazonian women attempt to jump through as many hoops in a single leap, Bonnie secretly wishes that Wonder Woman wins the competition. When she does, Bonnie admits that she wished Wonder Woman to win and it came true.

With only one wish left, Bonnie thinks long and hard still can't come up with any ideas. After being shown more of Paradise Island. When Bonnie goes out for a swim, she is suddenly shot into the air by a waterspout, prompting Wonder Woman to save her from the hungry jaws of some sharks. Back on the Island, Bonnie looks through some books and gets some inspiration: Seeing old photos of Wonder Woman as a girl, she asks to go back in time and have an adventure with Wonder Woman's younger self, Wonder Girl. Wonder Woman complies by taking her to the Amazonian lab where Wonder Woman uses a time machine to send Bonnie back in time to Diana's youth.

There, Bonnie is greeted by the youthful Wonder Girl, who shows her more wonders of Amazonian science, including a room that uses extreme cold to shrink objects in size. Putting on special skin suits to allow them to breath under water, Wonder Girl and Bonnie dive into the ocean where they rescue Mer-Boy from being trapped inside a clam. Deciding to go look for sunken treasure, the trio fight off an octopus and recover a treasure chest. Returning to Paradise Island, the girls open the chest and three alien insects hop out from inside. Upon their freedom they grow in size and use a gas to knock out all the Amazons except Wonder Girl and Bonnie. Freeing Bonnie from the insects clutches, Wonder Girl tricks them into entering the shrinking room and uses it's extreme cold to shrink the insects to nothingness. With the threat over and Bonnie's time in the past over with, Wonder Girl sends her back to the present in the time machine.

Retrieved from "https://heykidscomics.fandom.com/wiki/Wonder_Woman_Vol_1_112?oldid=1468355"
Community content is available under CC-BY-SA unless otherwise noted.