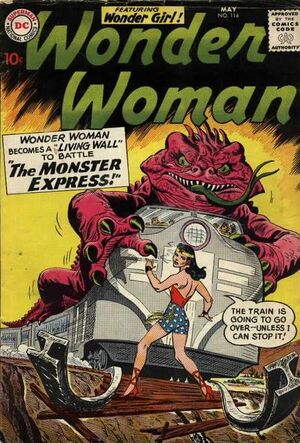 Appearing in "The Monster Express!"Edit

Synopsis for "The Monster Express!"Edit

Reports are coming into military intelligence that alien invaders are maintaining their position just out of Earth orbit, prompting the military to be at the ready for anything. Steve Trevor takes the down time as a moment to drag Diana Prince out to the Tracy Day Parade, which he is going to in order to visit his sweetheart, Wonder Woman. Wondering how she can get away from Steve long enough to change Wonder Woman, Diana gets her chance when a scaffold holding some window washers breaks loose and begins to fall. While Steve rushes off to see what he can do, Diana changes into Wonder Woman and leaps to the rescue, saving the men from certain death. Meeting with Steve, they continue along to watch the parade.

The parade has a number of large balloons in the shape of various dinosaurs and monsters, and there is a also a balloon in the image of Wonder Woman herself. Suddenly a powerful gust of wind carries off the balloons, Wonder Woman rushes off to stop them from floating away, when she realizes the cars that were pulling the balloons are being carried away as well, and frees them, carrying their passengers safely to the ground. In doing so she has to allow the balloons to float away.

Wonder Woman decides to go out in her robot jet to recover the missing balloons with Steve Trevor. While they are on their search, they are attacked by one of the balloons -- this one shaped like a pterodactyl -- while they are flying over a gorge. With some fancy flying, Wonder Woman manages to burst the balloon creature when it latches onto the wing of her jet. With the possibility that the other balloons might have come to life, Wonder Woman and Steve continue their search. The other balloons are all found and destroyed: A stegosaurus destroys a dam, forcing Wonder Woman to prevent a flooding, a tyrannosaurus rex and a monster wreck a train bridge and Wonder Woman tricks them into fighting each other to the death while fixing the tracks.

They then get a report that the Wonder Woman balloon has attacked a military base and stolen the new S-Bomb from the armory. Rushing off to the base, Wonder Woman ropes up the balloon in her image and carries it up into space with the bomb toward the alien invasion fleet. There, she unleashes the balloon upon them, and as the aliens weapons blaze, they strike the s-bomb causing it to detonate destroying their flee. Rocked in the explosion, Wonder Woman still manages to lang the plane safely. Later, Steve takes Wonder Woman out on a date, and surprises her with a present: harmless balloons.

Wonder Girl is depressed and her sadness begins to worry her mother Queen Hippolyta. One night she decides to ask her daughter what's wrong and learns that Wonder Girl yearns for a girl her own age to play with. Realizing what's wrong, the queen has the Amazon's top scientists build her a robot friend that is made in the likeness of a girl Wonder Girl's age.

At first, the surprise brings Wonder Girl great happiness, but she soon realizes that the robot is no substitute for a real person: While playing ball with the robot tosses the ball so high and so fast it begins to melt from the wind friction. When jumping rope with the robot, Wonder girl realizes the same results, the robot can jump rope with her so fast, the resistance causes the skipping rope to burn away.

When going swimming, Wonder Girl and the robot come across an octopus and when she realizes she can't communicate with the robot under water is forced to rescue it. While out trying to catch a butterfly, Wonder Girl spies Mer-Boy making time with her new robot friend. Jealous, she catches the merboy kissing the robot and is furious. Pulling her robot companion away as a storm drifts in telling Mer-Boy she no longer trusts him and leaving him confused. As they get to the mainland a bolt of lightning strikes the robot causing it to explode.

Witnessing this, Queen Hippolyta asks Wonder Girl if they'd like them to construct her another girl robot. Wonder Girl refuses, telling them that one Wonder Girl on the island is enough.

Retrieved from "https://heykidscomics.fandom.com/wiki/Wonder_Woman_Vol_1_114?oldid=1468358"
Community content is available under CC-BY-SA unless otherwise noted.