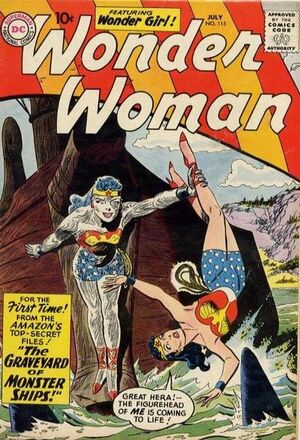 Appearing in "Graveyard of Monster Ships!"Edit

Synopsis for "Graveyard of Monster Ships!"Edit

Wonder Woman's old foe Angle Man is preparing to launch another attack against the might maid. He reveals his latest invention to a group of mobsters, a mechanical brain that can animate lifeless objects. When a mobster mocks this invention, Angle Man shows that it works by bringing the mobsters cigar to life and using it to club the mobster into submission. When they ask Angle Man how his is going to attack Wonder Woman, he shows off a newspaper clipping of a newspaper report pertaining to an expedition Wonder Woman is going on to explore an old ship graveyard.

She then pulls the robot out of the water, and as the mastheads follow her, she reprograms Animox to order the mastheads to fly into space before tossing the mechanical brain out into space with them. On their way through the atmosphere, the objects smash Angle Man's ship sending him falling into Wonder Woman's clutches. With the creatures also letting Steve go, she catches him as well and with Angle Man's plot foiled Wonder Woman takes him off to custody.

Wonder Girl is eager for the day when she will grow up and become Wonder Woman, however her mother Queen Hippolyta cautions her that she must first past all her studies. While out practicing her ability to glide on air currents. While she is soaring near the ocean she is pulled under water by Mer-Boy who is eager to see her. Wonder Girl is furious that he interrupted one of her tests and sends him away. He soon gets caught up with a shark and an octopus and Wonder Girl has to rescue him. When he tells her he did it on purpose just to seek attention, Wonder Girl angrily flies off telling Mer-Boy that she doesn't want to see him again. When she returns to the mainland, she is scolded by her mother for "playing around".

Upset at being rejected by Wonder Girl, Mer-Boy returns to his homeland and broods as all he wanted to do was to get Wonder Girl to wear his pin and then go to the undersea dance. He attempts to try and win Wonder Girl over by sending her a sky-written message with flying fish. This only works to embarrass Wonder Girl who flies off to swat away the message. Seeing that Mer-Boy has written the message in many places, Wonder Girl furiously goes to erase them all, getting caught up fighting a Roc when she tries to wipe off his graffitti from one of it's eggs.

She catches him in the act of writing the same message on a giant turtle shell and gets him to stop it. However when she catches him writing on the side of a Brontosaurus, she tries to stop that as well and gets smashed by the creatures tail. This knocks her out, making her an instant victim for a giant electric eel. Seeing Wonder Girl in trouble, Mer-Boy saves her life and when she revives she is thankful to him for saving her life. When Mer-Boy explains that he wants her to wear his pin and go to the dance with him, she makes up with him and accepts his offer and invitation.

Retrieved from "https://heykidscomics.fandom.com/wiki/Wonder_Woman_Vol_1_115?oldid=1468360"
Community content is available under CC-BY-SA unless otherwise noted.