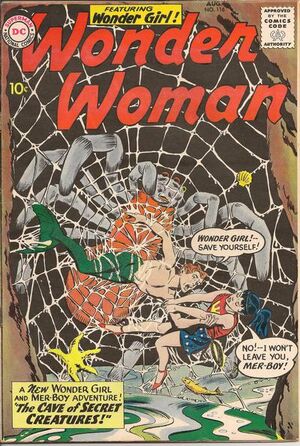 Appearing in "The Cave of Secret Creatures!"Edit

Synopsis for "The Cave of Secret Creatures!"Edit

Mer-Boy is depressed that while other youths in his village have regular relationships he must forever be second place in Wonder Girl's life, especially since no man can set foot on Paradise Island. Attempting to get her attention he feigns being injured until Wonder Girl comes to his rescue. He reveals his ruse and get nothing but her anger in return as she flies off, making him wonder what he did wrong.

When she goes to her mother Queen Hippolyta for advice, the queen tells Wonder Girl that the boy merely acts out foolishly because he cares for her and that she should be more sympathetic toward him. She decides to give this a shot and when Mer-Boy sends her a message asking her to come to a dance, she accepts and gets dressed up for the occasion. However when she accompanies Mer-boy to the dance, Diana becomes instantly jealous when Mer-Boy shows more attention toward a female mergirl named Firra and storms off. When Mer-Boy attempts to explain things, she refuses to listen and clamps him in a giant clam before swimming off.

Firra, being only friends with Mer-Boy, hears about what happens and tries to explain to Mer-Boy that women get jealous and that she'll eventually get over it if he gets her something special. However, Mer-Boy takes this too far and goes to collect the rarest item in the land: The sea spider necklace for Wonder Girl. Hearing about this, and knowing such a trip would be dangerous, Firra goes to Paradise Island and explains everything to Wonder Girl.

Worried for Mer-Boy, Wonder Girl swims to the sea-spiders lair and finds Mer-Boy caught in the aquatic-arachnids web. She frees him and gets the sea-spider caught up in it's own web. When they are swimming away Mer-Boy laments that he failed in getting her his present, but Wonder Girl tells him that he's won her favor again and kisses him on the cheek.

Appearing in "The Time Traveler of Terror!"Edit

Synopsis for "The Time Traveler of Terror!"Edit

Diana Prince and Steve Trevor are spending time in the library looking over history books. They marvel over the fall of Atlantis, Pompeii, the Chicago fire of and the Jonestown flood. They however fail to notice that the same man appears in all the same pictures. When Steve leaves to meet up with Wonder Woman, Diana rushes ahead so she can meet Steve as her alter ego.

They got to the sight of a new rocket and meet it's inventor, Professor Andro. Finding something familiar about him, Wonder Woman takes his photograph and takes Steve off to get it developed. Following her hunch she takes the Steve with the photo back to the library where they review the history book and confirm her suspicion: Professor Andro resembles a man in each of the photos of different disaster stories from history.

Suspecting an evil time traveler, Steve and Wonder Woman rush back to the military base to warn General Darnell. Darnell finds their claims hard to believe it, moreover, Andro reveals that he has been overhearing the conversation and in light of Wonder Woman's warning of disaster he agrees to let the military inspect the rocket. However, when the search turns up nothing, Andro reveals that he is an alien that travels through time via mentotravel and that he has planeted an s-bomb aboard the ship that will cause the greatest disaster the world has ever known. Before they can stop him he uses his mental powers to paralyze them until it's too late to stop the blast off.

With the regular photographer ill, Wonder Woman offers to take a picture of Andro and the other scientists using a special Amazonian camera that will hypnotize the invader. However, Andro anticipates this, and revealing his true alien form makes an escape as the rocket lifts off. Wonder Woman flies after him and tries to stop him with her various weapons, each one producing no effect. Ultimately, it is the elements that prove to be Andro's undoing as he is shattered to bits by a lightning strike. With seconds to spare, Wonder Woman shoves the rocket off course causing it to fly off into space where it detonates harmlessly, saving the world.

Retrieved from "https://heykidscomics.fandom.com/wiki/Wonder_Woman_Vol_1_116?oldid=1468363"
Community content is available under CC-BY-SA unless otherwise noted.