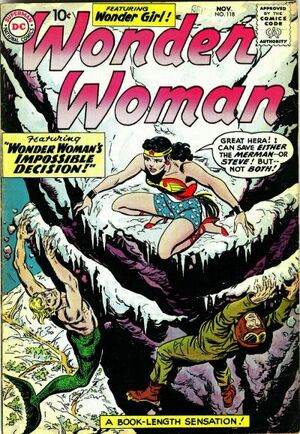 Manno? Don't be silly, Steve! I've known him all my life! He's like the boy next door! Except he lives in the sea!

Steve Trevor, after getting another rejection from Wonder Woman to his marriage proposal, believes he must have a rival. To check his suspicion, he tracks her Amazon Plane in secret and beholds a meeting of the Amazon and Merman, the former Mer-Boy, her boyfriend in years past. Wonder Woman scoffs at Steve’s jealousy, telling him Merman is not his rival. But when Steve is endangered by an octopus underwater, Merman comes to his rescue. He makes friends with the amphibian and learns of his teenage crush on Wonder Girl. Later, Steve rescues Merman from a giant bird, evening the score. The giant bird returns and sweeps both Merman and Steve off the cliff on which they had been standing. Wonder Woman captures the bird, but is faced with the decision of which man to save, with both of them hanging on to a ledge by their fingertips. Steve gallantly lets go, telling her to save Merman. But Wonder Woman manages to save both Steve and Merman, and will not reveal which one she would have chosen to save if she had had to sacrifice one of them.

Retrieved from "https://heykidscomics.fandom.com/wiki/Wonder_Woman_Vol_1_118?oldid=1468366"
Community content is available under CC-BY-SA unless otherwise noted.