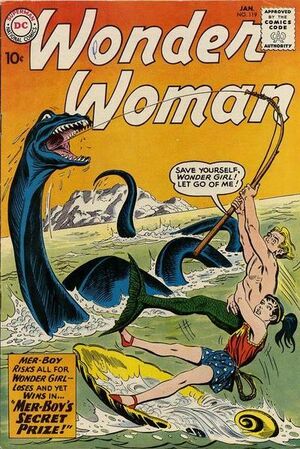 Mer-Boy, trying to win the heart of Wonder Girl, participates in an Atlantean contest to win a pearl tiara by catching the most unusual fish. Instead, she has to save him when he accidentally catches a giant bird. Later, she has to intervene again when he catches a giant sea monster. Another Atlantean wins the pearl tiara for his girl. But when Mer-Boy retrieves his rod and reel from a shark which he has hooked, he finds a pearl tiara on the end of the hook, which the shark had swallowed. Mer-Boy is thus able to give Wonder Girl the tiara, which she calls “the most beautiful gift I ever received in my life”.

Appearing in "Three Wishes of Doom"Edit

Synopsis for "Three Wishes of Doom"Edit

Inez Grey, a star athlete at Holliday College, beats Etta Candy and her three friends in bouts of swimming, jumping, tennis, and fencing. When Wonder Woman comes to console the Holliday Girls, Inez tells her that she could do anything Wonder Woman can do if she only had the use of her bracelets, tiara, and lasso. Wonder Woman refuses to lend her equipment to the girl. But an electronic tabulator machine used to decide which person should have three wishes granted by Wonder Woman chooses Inez Grey. Inez naturally asks to borrow Wonder Woman’s bracelets, lasso, and tiara, but says she will return them as soon as she fails while using them. Since she does not have Amazon training, Inez fails in each attempt to use the equipment, and Wonder Woman has to save her. Finally, Inez apologizes for her rash statements, and says that “You are a Wonder Woman with or without your Amazon equipment!”

Retrieved from "https://heykidscomics.fandom.com/wiki/Wonder_Woman_Vol_1_119?oldid=1468368"
Community content is available under CC-BY-SA unless otherwise noted.