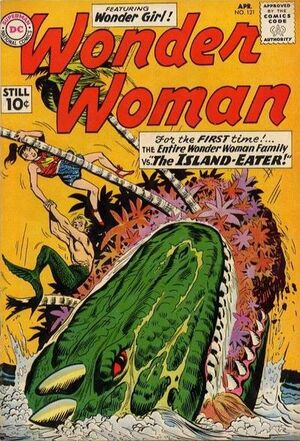 Appearing in "The Island Eater"Edit

Synopsis for "The Island Eater"Edit

Wonder Girl watches herself on a future-viewing device (as Wonder Woman) and despairs of not being able to match her older self’s strength and skills. Later, she saves herself and Mer-Boy from a time-warp trap. Also, Queen Hippolyte leads an Amazon fleet against invaders from Pluto, and Wonder Woman watches her mother’s victory on a view-screen tuned to the past.

Retrieved from "https://heykidscomics.fandom.com/wiki/Wonder_Woman_Vol_1_121?oldid=1468371"
Community content is available under CC-BY-SA unless otherwise noted.