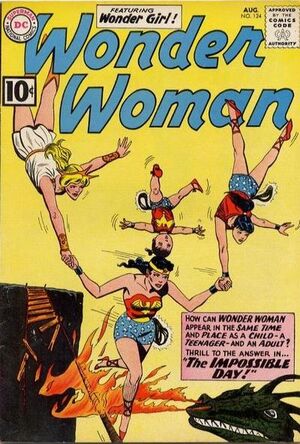 Appearing in "The Impossible Day"Edit

Synopsis for "The Impossible Day"Edit

After Steve Trevor and Diana Prince come upon an “impossible” cave-painting in which Wonder Woman, Wonder Girl, Wonder Tot and Queen Hippolyta were shown together fighting a dinosaur, Wonder Woman returns to Paradise Island. There, she and Queen Hippolyta, inspired by the painting, splice together reels of film and create a fictional movie in which they team up with Wonder Tot and Wonder Girl to fight Multiple Man, a chameleon-like menace.

Retrieved from "https://heykidscomics.fandom.com/wiki/Wonder_Woman_Vol_1_124?oldid=1551589"
Community content is available under CC-BY-SA unless otherwise noted.