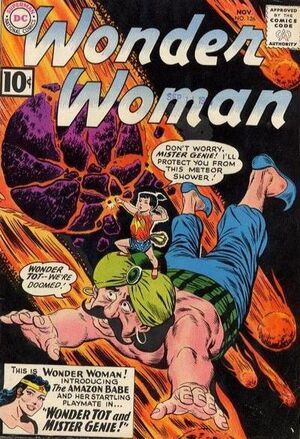 I told you. I not mosquito! Mister Dragon! I Wonder Tot! Amazon!

When Queen Hippolyte sees Wonder Tot balancing a golden apple on her head and wearing a diamond star-shaped clip for her ponytail, she asks her child how she got the objects. Wonder Tot explains that when a strong wind blew her out of bed, she rode the air currents to an island where she overcame a guardian dragon and took one of the golden apples that grew there on a tree. Later, she found a chest on the island’s beach, opened it, and liberated a genie who had been imprisoned there. The genie, who had grown embittered over his long imprisonment, threw Wonder Tot inside his chest and sat on it to keep her inside. But Wonder Tot used ventriloquism to make it seem that she had escaped, and the genie, whom she calls “Mr. Genie”, got up from the chest to find her, enabling her to crawl out. She then imprisoned him in the chest, until he swore to grant her one wish, upon which she let him free again. Overjoyed, Mr. Genie kicked the chest into the sea and asked Wonder Tot what her wish was. She wished for a star to be made into a clip for her ponytail. After an adventure in space in which the two new friends destroyed an alien invader craft and smashed through a meteor shower, Mr. Genie recovered a diamond within one of the smashed meteors and gave it to Wonder Tot for a hair clip. Then the two parted, with Mr. Genie assuring her he would do his best to fulfill any further wishes she might have.

Appearing in "The Unmasking of Wonder Woman"Edit

Synopsis for "The Unmasking of Wonder Woman"Edit

Come what may, Wonder Woman cannot get Steve Trevor interested in Diana Prince on a date, even when she switches to Diana and defeats a flaying saucer full of subterranean invaders.

Retrieved from "https://heykidscomics.fandom.com/wiki/Wonder_Woman_Vol_1_126?oldid=1678277"
Community content is available under CC-BY-SA unless otherwise noted.