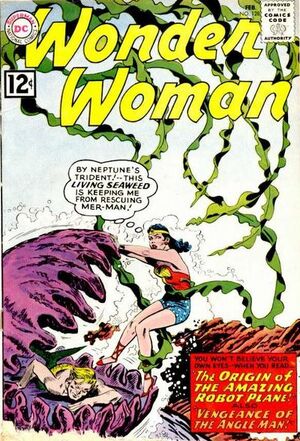 Appearing in "Origin of the Amazing Robot Plane"Edit

Synopsis for "Origin of the Amazing Robot Plane"Edit

Queen Hippolyte plays Wonder Woman recordings of Wonder Tot and Wonder Girl asking how she won the Amazon Plane. In response, Wonder Woman tells them a story of how she found Pegasus and used him in a battle with a pterodactyl, until the winged horse was transformed by a strange cloud into the Robot Plane.

Appearing in "Vengeance of the Angle Man"Edit

Synopsis for "Vengeance of the Angle Man"Edit

Angle Man tricks Wonder Woman into sinking her feet into super-hard, quick-drying cement, but she manages to perform her duties while stuck in a concrete block.

Retrieved from "https://heykidscomics.fandom.com/wiki/Wonder_Woman_Vol_1_128?oldid=1468384"
Community content is available under CC-BY-SA unless otherwise noted.