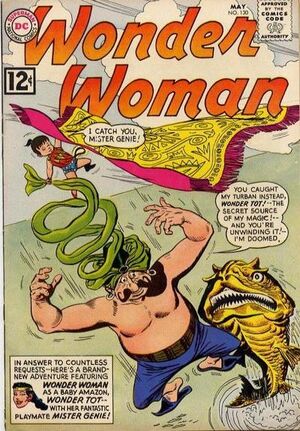 For once, that eager beaver Amazon isn't around to spoil my plans! Ha-ha-ha!

Mr. Genie takes Wonder Tot on another series of adventures, during which they foil an alien invasion attempt.

Appearing in "The Mirage Mirrors"Edit

Synopsis for "The Mirage Mirrors"Edit

After Diana Prince finds that Steve Trevor is too dumb-struck with love for Wonder Woman to consider taking her out, she asks Queen Hippolyte for advice. She tells her daughter how, when Hercules was smitten with her, and did nothing but brag to her of Hippolyte’s beauty while the Queen assumed a secret identity as an Amazon soldier, she fooled him with a “mirage-mirror” that gave her two heads, allowing her to assume any shape she wished temporarily. Later, when he asked the normal Queen Hippolyte for a date, Hercules was chagrined to find her going off with Apollo. Queen Hippolyte still has a mirage-mirror on hand, and lends it to Wonder Woman. The Amazing Amazon goes to a charity carnival with Steve Trevor and uses it to distort her appearance into that of a circus fat-girl and a super-tall elongated thin woman, in which guises she thwarts attempts of Angle Man and his gang to rob the carnival. Finally, when Diana Prince appears, Steve asks her for a date, but she turns out to have Superman on her arm, and tells him she has other plans.

Retrieved from "https://heykidscomics.fandom.com/wiki/Wonder_Woman_Vol_1_130?oldid=1512384"
Community content is available under CC-BY-SA unless otherwise noted.