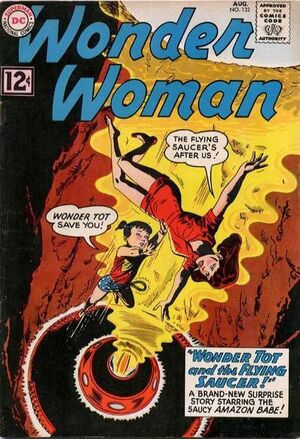 You really had troubles with your suitors, compared to me, Mother! But -- what became of Prince Theno? Did he ever return to claim your hand? Did he really have to fight Hercules?

Appearing in "Wonder Tot and the Flying Saucer!"Edit

Synopsis for "Wonder Tot and the Flying Saucer!"Edit

Wonder Woman is regressed by Amazon science into a baby so, that she can interpret another baby’s eyewitness report of a flying saucer abduction. She then battles the aliens as Wonder Tot.

After Wonder Woman confesses the problem she has with her rival suitors, Steve Trevor and Manno the Merman, Queen Hippolyta tells her about the time in the distant past in which Hercules tried to win her hand.

Retrieved from "https://heykidscomics.fandom.com/wiki/Wonder_Woman_Vol_1_132?oldid=1468391"
Community content is available under CC-BY-SA unless otherwise noted.