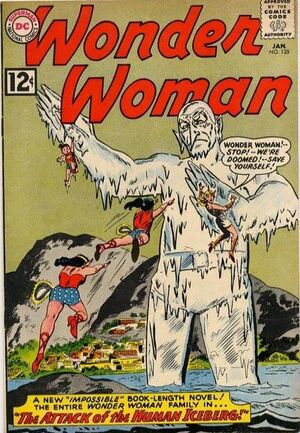 Every time we think he's destroyed... he simply returns in another form!

Appearing in "Attack of the Human Iceberg"Edit

Synopsis for "Attack of the Human Iceberg"Edit

Wonder Woman fan Carol Sue wins a trip to Paradise Island in a contest, but gets more excitement than she bargained for: Multiple Man, the Amazons’ nemesis, chooses that time to return and attack the island. Wonder Woman, Wonder Girl, Wonder Tot, and Queen Hippolyte battle and finally defeat the shape-changing menace, though they are not certain at the end whether he is destroyed, or merely abated.

Retrieved from "https://heykidscomics.fandom.com/wiki/Wonder_Woman_Vol_1_135?oldid=1551586"
Community content is available under CC-BY-SA unless otherwise noted.