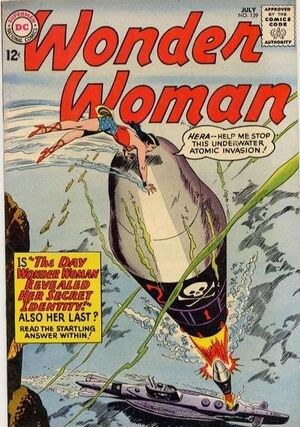 You-- Impersonating Wonder Woman-- ? Ha-ha! I don't want to hurt your feelings, Di-- but-- you'd be the last person in the world-- anyone would mistake for my sweetheart!-- Ha-ha-ha!

Appearing in "The Day Wonder Woman Revealed Her Secret Identity"Edit

Synopsis for "The Day Wonder Woman Revealed Her Secret Identity"Edit

When Steve Trevor is frustrated by Wonder Woman’s refusal to marry him until all crime and injustice is erased from the Earth, he wishes aloud that she would forget who she is. Shortly thereafter, she destroys two enemy missiles by hurling them against each other, and is caught in the explosion, knocked unconscious, and given amnesia when she awakens. Upon reviving, she flatly tells Steve that she is Diana Prince, and that Wonder Woman has lent her her costume for a masquerade ball she and Steve will be attending, but that she is not Wonder Woman. Steve makes numerous attempts to jog back her memory, including putting himself in danger, but nothing works. Finally, when robot animals at the ball snatch American military figures in a kidnap attempt, Wonder Woman is struck a glancing blow and recovers her memory. She rescues the kidnapees and convinces Steve by a ruse that Diana Prince and Wonder Woman are not the same person.

Retrieved from "https://heykidscomics.fandom.com/wiki/Wonder_Woman_Vol_1_139?oldid=1468402"
Community content is available under CC-BY-SA unless otherwise noted.