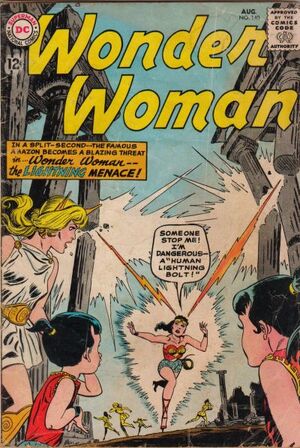 Appearing in "The Human Lightning"Edit

Synopsis for "The Human Lightning"Edit

Morpheus appears to Diana Prince and agrees to grant the wishes of three people of her choosing -- Mister Genie, Mer-Boy, and the Duke of Deception -- the last of which causes Wonder Woman to become an out-of-control, lightning-radiating menace.

Retrieved from "https://heykidscomics.fandom.com/wiki/Wonder_Woman_Vol_1_140?oldid=1551587"
Community content is available under CC-BY-SA unless otherwise noted.