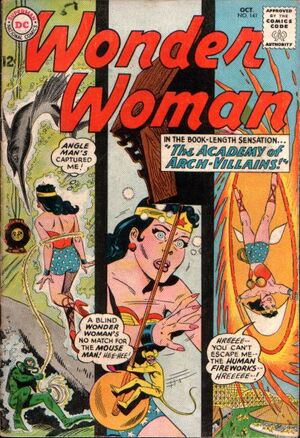 Appearing in "The Academy of Arch-Villains"Edit

Synopsis for "The Academy of Arch-Villains"Edit

The underworld offers a golden statuette, the Golden WW, in the shape of Wonder Woman to the one villain who can defeat and trap Wonder Woman, and leaks the offer to the press. The first to try is Angle Man, who fakes his reformation in order to lure Wonder Woman into a deathtrap, but she manages to escape and recapture him. The second is the Human Fireworks, a criminal scientist who transforms himself into a giant fireworks being and who gives her a tough battle before being blasted to bits by a meteor. But Wonder Woman has become blinded in the encounter, and Mouse-Man, a tiny-sized villain is able to induce her to come with him as a prisoner to the Arch-Villains’ convention. Once there, she does a Samson-like wrecking of two support pillars, bringing down the convention hall and herding the escaping crooks into the hands of the police. Wonder Woman, who had recovered from her blindness earlier and pulled the ruse to trap the crooks, catches Mouse-Man and turns him over to the police. The tiny villain is jailed in a bird cage.

Retrieved from "https://heykidscomics.fandom.com/wiki/Wonder_Woman_Vol_1_141?oldid=1468405"
Community content is available under CC-BY-SA unless otherwise noted.