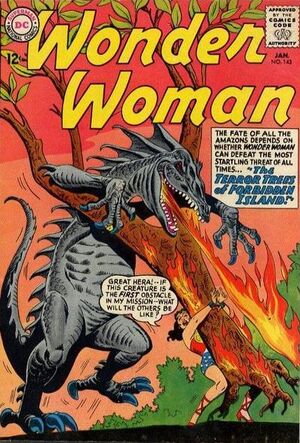 Appearing in "The Terror Trees of Forbidden Island"Edit

Synopsis for "The Terror Trees of Forbidden Island"Edit

When alien invaders attack Paradise Island, the Amazons at first repel them with the dazzling power of the Sun Sword, which has incredible power for one year. But the weapon peters out in the attack, the year’s charge being used up. Queen Hippolyte sends Wonder Woman to Forbidden Island, to wrest another Sun Sword from within one of the Trees of Vengeance. At first, Wonder Woman is surrounded by tree-wood herself when she grasps the handle of another Sun Sword stuck in one of the Vengeance Trees. But half of the alien invasion force has trailed her and inadvertently frees her from her wooden prison by attacking her with rays. Liberated, Wonder Woman defeats the aliens with the new Sun Sword, and, when she gets home, learns that Queen Hippolyte and the Amazons have been able to overcome the rest of the aliens’ depleted forces.

Appearing in "The Amazon Mouse Trap"Edit

Synopsis for "The Amazon Mouse Trap"Edit

Mouse-Man escapes from prison and takes Wonder Woman captive with her own lasso.

Retrieved from "https://heykidscomics.fandom.com/wiki/Wonder_Woman_Vol_1_143?oldid=1468408"
Community content is available under CC-BY-SA unless otherwise noted.