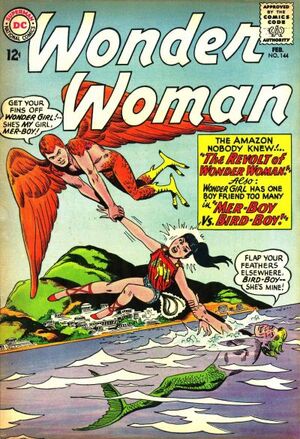 Appearing in "Revolt of Wonder Woman"Edit

Synopsis for "Revolt of Wonder Woman"Edit

Wonder Woman, exhausted by the many demands upon her and disheartened by people’s perception of her as a “fighting machine”, succumbs to despair, wishing she could find someone who appreciates her for herself.

Mer-Boy and Bird-Boy compete for the hand of Wonder Girl by defeating threats to Paradise Island.

Retrieved from "https://heykidscomics.fandom.com/wiki/Wonder_Woman_Vol_1_144?oldid=1468410"
Community content is available under CC-BY-SA unless otherwise noted.