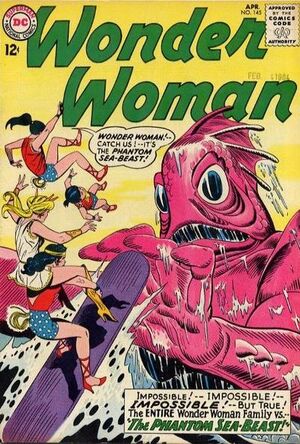 Appearing in "The Phantom Sea Beast"Edit

Synopsis for "The Phantom Sea Beast"Edit

Wonder Tot, Wonder Girl, and Queen Hippolyte all have dreams in which they encounter a monstrous, pink-shelled “Phantom Sea-Beast”. However, Wonder Woman has no such dream, and, when the Phantom Sea Beast appears for real and menaces her family, she is able to destroy it. But the Wonder Woman Family is drawn through time and caged by future zookeepers who were trying to get the Sea-Beast for their zoo, and now insist that the Wonder Woman Family take its place in their cage. Wonder Woman strikes a bargain with their captors: if they send her back to the time of the dinosaurs, she will capture one for them and they can let her family go. She manages to grab a pterodactyl egg, which hatches when she and it are pulled into the future. Satisfied, the zookeepers return the Wonder Family to their normal era.

Retrieved from "https://heykidscomics.fandom.com/wiki/Wonder_Woman_Vol_1_145?oldid=1551596"
Community content is available under CC-BY-SA unless otherwise noted.