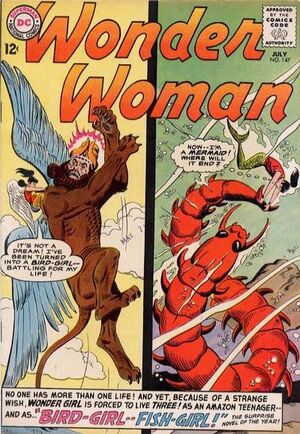 Mer-Boy hitches an airborne ride with Bird-Boy, both of whom keep from touching Paradise Island as they watch Wonder Girl pass a battery of tests implemented by the “goddess” Athena. As a reward, Athena dubs Wonder Girl a true Amazon, and tells her she will grant the first request made of her. Mer-Boy and Bird-Boy make their requests simultaneously, wishing that Wonder Girl be turned into a mermaid or a bird-girl so that she can spend all her time with one of them. Wonder Girl cannot decide which she will choose, so Athena chooses for her, giving her wings and bird-like legs to go first with Bird-Boy. Wonder Girl meets Bird-Boy’s parents and friends, but finds she has no taste for worm pie or birdseed pizza. She fights off a flying Sphinx, but tells Athena she was not meant to be a bird-girl. Next, she is transformed into a mermaid, and accompanies Mer-Boy, only to find that she is “a fish out of water”, despite defeating a giant centipede. Athena restores Wonder Girl to normalcy, and both Mer-Boy and Bird-Boy hope they still have a chance at Wonder Girl’s heart.

Retrieved from "https://heykidscomics.fandom.com/wiki/Wonder_Woman_Vol_1_147?oldid=1468415"
Community content is available under CC-BY-SA unless otherwise noted.