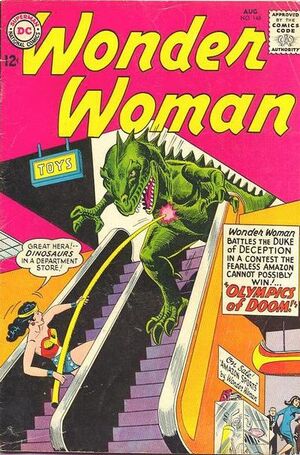 Appearing in "Olympics of the Doomed"Edit

Synopsis for "Olympics of the Doomed"Edit

The Duke of Deception makes Wonder Woman unable to distinguish reality from illusion by creating realistic illusions that deceive her. Finally, he tricks her into a trap that brings her back to Mars, where she is imprisoned in a cage which, he says, will not free her unless he takes her place, and made to participate in the Olympics of the Doomed before the Martian people. Despite being in a cage, Wonder Woman triumphs, and finds that she can transmit her own illusions. Thus she makes the Duke believe she has escaped the cage, whereupon he opens it to check, frees her, and imprisons himself. Wonder Woman returns to Earth in a borrowed space ship.

Retrieved from "https://heykidscomics.fandom.com/wiki/Wonder_Woman_Vol_1_148?oldid=1468417"
Community content is available under CC-BY-SA unless otherwise noted.