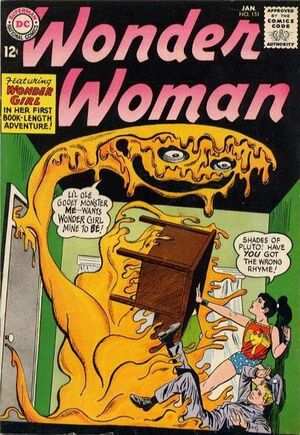 Appearing in "Wonder Girl vs the Teenage Monster"Edit

Synopsis for "Wonder Girl vs the Teenage Monster"Edit

After Wonder Girl looks through a photo album with pictures of Wonder Woman's boyfriends: Manno the Merman, Wingo the Birdman and Steve Trevor, she falls asleep and dreams that she and a teen aged Steve Trevor have a battle against a blob-like alien called The Glop, who talks in rhymes after hearing a rock ‘n’ roll song on a radio station.

Retrieved from "https://heykidscomics.fandom.com/wiki/Wonder_Woman_Vol_1_151?oldid=1468421"
Community content is available under CC-BY-SA unless otherwise noted.