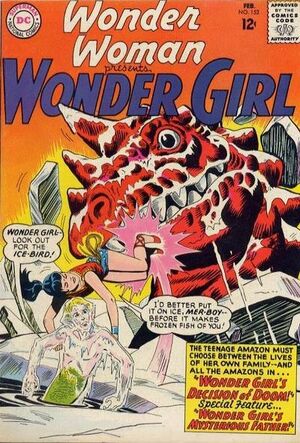 Athena pronounces Judgment Day on Paradise Island, in which all but one of the Wonder Woman family will have their powers erased for a day, and the single member excepted will be expected to battle all threats, with their island and Amazon powers forfeit if she fails. Wonder Girl is the only family member to retain her powers. The other Amazons leave Paradise Island, and Wonder Girl alone must battle a giant serpent, a Medusa-Bird, a dinosaur and the Duke of Deception. When she wins every battle, Athena grants their island and powers once again.

Wonder Girl and Queen Hippolyte become depressed while watching a newsreel from Man’s World showing a “Dad and Daughter Day” celebration; both of them miss the same individual, the man who fathered Wonder Girl, whom Hippolyte says was lost at sea. Later, Wonder Girl rescues a shipwrecked man whose memory was affected by a lightning blast and who thinks Wonder Girl is really his daughter, Annie. Wonder Girl builds an island for both of them to live on temporarily, since the man cannot be allowed to set foot on Paradise Island. Queen Hippolyte tells Wonder Girl to stay with the man till a passing ship can pick him up. Both the man and his lost daughter are acrobats, and Wonder Girl helps him perform acrobatic stunts, with Bird-Boy and Mer-Boy lending a hand. The two put on an acrobatic act for the Amazons, and Wonder Girl enjoys the presence of a surrogate “father”. But, soon afterward, she finds Annie, who has also been lost at sea, and reunites her with her father. The man’s memory returns at the sight of his true daughter, and Wonder Girl takes both of them to a passing ship, which will take them back to America.

Retrieved from "https://heykidscomics.fandom.com/wiki/Wonder_Woman_Vol_1_152?oldid=1468423"
Community content is available under CC-BY-SA unless otherwise noted.