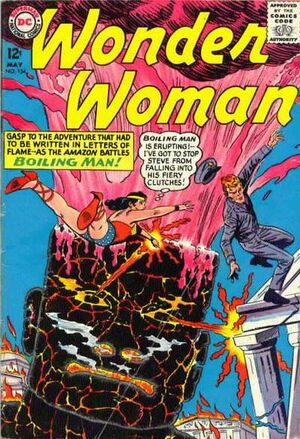 Appearing in "Battle of the Boiling Man"Edit

Synopsis for "Battle of the Boiling Man"Edit

Wonder Woman is summoned to Paradise Island for Name Day, in which she must prove for another year that she is worthy to bear the name Wonder Woman. Steve Trevor threatens to land on Paradise Island, which would violate Aphrodite’s Law, but promises not to set foot on the island if Wonder Woman will promise not to become engaged to Mer-Man or Bird-Man during Name Day, which promise she gives him. On the way, she encounters Mer-Man and Bird-Man while battling a giant sphinx. Then Athena and Aphrodite oversee the Name Day trials, which include a glass pole climb (won by Wonder Woman, Wonder Girl, and Wonder Tot), after which the “goddesses” give the three Wonder Family members a series of tests, and say that if they all succeed, the three of them must decide which is worthy of the name “Wonder Woman”. Wonder Tot and Wonder Girl perform their tasks easily. When Wonder Woman’s time comes, she is astonished to see Steve Trevor knocked out of the sky, and Boiling Man, a volcanically-erupting creature, emerging from beneath Paradise Island at the same time. She saves Steve by blowing him skyward, then entombs Boiling Man in an iceberg which she throws into space. Athena reveals that Wonder Woman has fulfilled her task, and Wonder Tot and Wonder Girl vote Wonder Woman the Name Day winner. Wonder Woman takes Steve back to Man’s World in her Robot Plane.

Retrieved from "https://heykidscomics.fandom.com/wiki/Wonder_Woman_Vol_1_154?oldid=1551590"
Community content is available under CC-BY-SA unless otherwise noted.