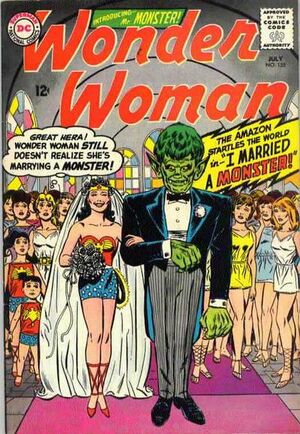 I'm going to start building the biggest "No Trespassing" sign you ever saw!

Appearing in "I Married A Monster!"Edit

Synopsis for "I Married A Monster!"Edit

Much to the dismay of Steve Trevor, Birdman, and Manno the Mer-Boy, Diana decides to marry an unnamed Monster Prince. He runs off at the last minute, and Diana finds out that he is actually very handsome - when he does good, but a monster when he does bad. The Monster Prince decides that he wants to be left alone.

Retrieved from "https://heykidscomics.fandom.com/wiki/Wonder_Woman_Vol_1_155?oldid=1551591"
Community content is available under CC-BY-SA unless otherwise noted.