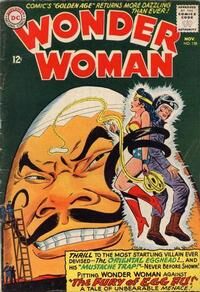 Merciful Minerva Y-you've done it! You've killed them all! You've only left my mother... and Steve! What are you going to do with us?

Appearing in "The Fury of Egg Fu"Edit

Synopsis for "The Fury of Egg Fu"Edit

Wonder Woman takes herself and Steve Trevor off Paradise Island (Steve, having been on a table, has not touched ground and is thus not in violation of Aphrodite’s Law). They opt to return to Oolong and battle Egg Fu. On the way, they see a tiny meteor of anti-matter destroy a large meteor of positive matter, and deduce that touching anti-matter might rid them of their explosive power. On Oolong, they fight off Red Chinese troops and tanks, but Egg Fu snatches them and uses their power against each other, rendering them both unconscious and then tossing them away. But as they arc skyward, they contact another piece of anti-matter and their explosive power is neutralized. Wonder Woman encircles Egg Fu with her magic lasso. The villain strains against the lasso’s loop and shatters himself, ending his threat forever. Relieved, Wonder Woman and Steve Trevor speed off in the Robot Plane.

Editor-writer Robert Kanigher summons the entire Wonder Woman cast to his office and tells them that they are all being retired in favor of a “new look” for Wonder Woman, a retro-Golden Age format. As such, only Queen Hippolyte and Steve Trevor remain of the supporting cast, and Kanigher makes a proclamation to an audience of comic fans--backed up by Wonder Woman, Queen Hippolyte, and Steve Trevor--that “We’re going to recreate the Golden Age--thrilling step by step!”

Retrieved from "https://heykidscomics.fandom.com/wiki/Wonder_Woman_Vol_1_158?oldid=1551594"
Community content is available under CC-BY-SA unless otherwise noted.