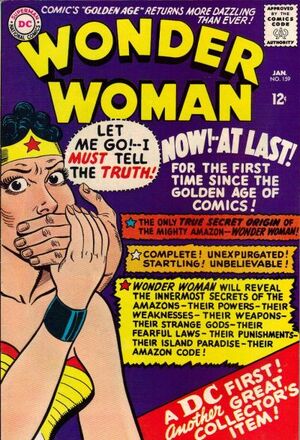 Appearing in "The Golden Age Secret Origin of Wonder Woman"Edit

Synopsis for "The Golden Age Secret Origin of Wonder Woman"Edit

In ancient times, Mars, the “god” of war, and Aphrodite, “goddess” of love, conflicted over who would rule humanity...Mars, with a sword, or Aphrodite, with love. To counter Mars’s violence on Earth, Aphrodite created the race of Amazons, giving them “the power of love” as well as strength that made them stronger than the mightiest man. Queen Hippolyte was given Aphrodite’s magic girdle, telling her that as long as she wore it, Amazons would be unconquerable. The Amazons are able to defeat male invaders, but, when Mars learns from Aphrodite about the magic girdle, he passes the information on to Hercules, his ally on Earth. Hercules is defeated by Hippolyte in battle, but romances her at a banquet afterward, tricks her into taking off her magic girdle, and has his men capture the Amazons. The women are shackled and enslaved. Hippolyta prays to Aphrodite, who tells her that, if a man breaks her bonds, she can be free. Thus, the Amazon queen hurls her chains against Hercules’s sword, which shatters the links and frees her. She then frees her sister Amazons, who help her beat Hercules and his army. Aphrodite tells Hippolyte that she and the Amazons must wear the bracelets from then on, as a warning not to submit to male domination. Aphrodite then leads the Amazons in ships to an island home, which they name Paradise Island. The “goddess” tells Hippolyte that, if a man sets foot on their island, the Amazons will lose their immortality and powers. Later, when both Athena and Aphrodite see Hippolyta depressed, Athena decides to give her a child. She guides Hippolyta in carving the figure of a baby girl from clay, then gives the child-statue life. Aphrodite gives the baby the name Diana, after the moon goddess, since the moon is shining down upon them, and Hippolyta calls the baby her “wonder child!”. When Diana is but a child, she shows herself to have the strength of Hercules and the speed of Mercury. At age 15, she gains her Bracelets of Submission. At nineteen, Wonder Girl is allowed to drink from the Fountain of Youth. Shortly after that, Diana and her friend Mala see a wrecked plane, with a pilot floating within, just off their island. Diana reaches the wreckage and beholds the pilot, Steve Trevor, the first man she has ever beheld. She takes Steve to her laboratory outside the city gates, not letting him touch the ground, and heals him with the power of her experimental Purple Ray. But Queen Hippolyta, discovering what she has done, insists that Steve Trevor be returned to Man’s World immediately. Diana insists on returning with Steve, whom she recognizes as unable to fly himself back. Hippolyta warns Diana that she will lose her Amazon birthright if she leaves Paradise Island, but realizes that her daughter has fallen in love with the stranger.

Aphrodite appears to Hippolyte and tells her that an Amazon must go to America with Trevor and remain there “to fight evil and injustice everywhere!” Hippolyte is instructed to send her greatest Amazon, and holds a contest to determine who has the greatest power. Diana competes while wearing a mask, and wins the contest. Accepting fate, Hippolyta gives Diana the red, white, blue, and yellow costume designed by Aphrodite and the Magic Lasso, made from links of the magic girdle of Aphrodite, which compels anyone bound with it to obey the orders of the binder. Diana is dubbed “Wonder Woman” by her fellow Amazons, and takes the transparent Robot Plane given her by Hippolyte to take herself and Trevor back to America.

On the way back to America, the Robot Plane carrying Wonder Woman and Steve Trevor is knocked down over the same island which caused Trevor’s plane to crack up. The island is inhabited by a gang of spies, who use a hidden anti-aircraft gun to wreck allied planes. Wonder Woman’s bracelets are chained together, but she tricks the spies into using the blast of their gun to shatter the chains, after which she easily defeats the spies and takes them back to America with herself and Trevor.

Retrieved from "https://heykidscomics.fandom.com/wiki/Wonder_Woman_Vol_1_159?oldid=1468434"
Community content is available under CC-BY-SA unless otherwise noted.