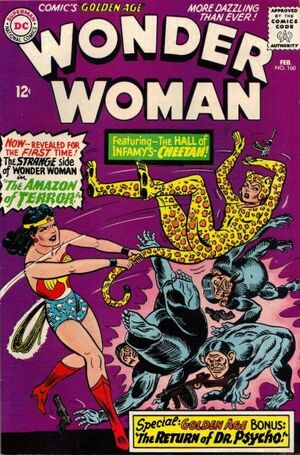 Appearing in "The Amazon of Terror"Edit

Synopsis for "The Amazon of Terror"Edit

Wonder Woman and Steve Trevor stop the Cheetah and her gang from robbing a zoo of its priceless extinct animal exhibit for a client. But the Cheetah escapes, and later hypnotizes Trevor into smooching with her. When Wonder Woman sees them, as the Cheetah had planned, she is tear-stricken and upset, allowing the villainess to take her by surprise, steal her magic lasso, and encircle her with it. Wonder Woman, enslaved by the Cheetah, is forced to take her and Steve to the Cheetah’s private island, where her personal army awaits to fight as mercenaries. The Cheetah forces Wonder Woman to remove her bracelets so that she will not be able to repel bullets with them. But the removal of the bracelets causes Wonder Woman to go into a rage, negating the lasso’s control and enabling her to break free and smash wildly into the Cheetah’s men, defeating them. Steve, who has recovered from the hypnosis, manages to get Wonder Woman’s bracelets back on her wrists. She kisses Steve, then captures the Cheetah, promising to take the villainess to an Amazon prison for reeducation.

To show Athena and Aphrodite that Wonder Woman’s beauty and wisdom, derived from goddesses, are nothing compared to the god-derived powers of strength and speed she possesses, Mars steals her Herculean strength and Mercurian speed temporarily and gives them to the woman-hating Dr. Psycho, who has been rejected by all women as a suitor because of his ugliness. Wonder Woman loses her power to Dr. Psycho while performing at a charity carnival, thus enabling Psycho to show her up in a contest of strength and speed. But the crowd rejects Dr. Psycho because of his appearance, leaving the little man alone and sorrowful. When Wonder Woman comes to comfort him, he steals her lasso and encircles her with it, forcing her to perform humiliating actions. Still, she pities Psycho, and says that she wants to be his friend. Disbelieving her, he loosens her from the lasso. She still offers him friendship, even kissing him at her request. Psycho is almost convinced of her sincerity, until Steve Trevor appears and she goes to him to explain. Angered, Psycho lifts the center pole of the tent, but finds his strength fading. Wonder Woman, reimpowered, grabs the pole and rights it as Psycho escapes.

Retrieved from "https://heykidscomics.fandom.com/wiki/Wonder_Woman_Vol_1_160?oldid=1468436"
Community content is available under CC-BY-SA unless otherwise noted.