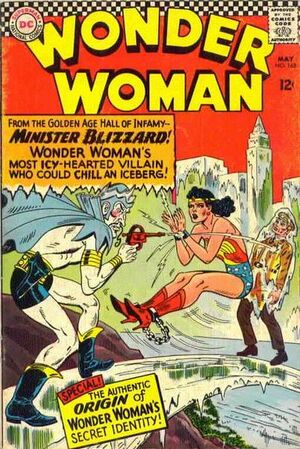 Appearing in "The Startling Secret of Diana Prince"Edit

Synopsis for "The Startling Secret of Diana Prince"Edit

After Wonder Woman takes the injured Steve Trevor to a military hospital in Washington, D.C., she sets up a hiding place for her Robot Plane, then goes into town and catches a mob of bank robbers. Then, still looking for a way she can easily be close to Steve, Wonder Woman comes upon a nurse weeping in the park. The nurse, Diana Prince, tells Wonder Woman that she and her fiancé are madly in love, but she has no money to relocate to South America, where he now lives and works. Wonder Woman notices that Diana is a virtual double for her without her glasses. She gives Diana the reward money she receives from stopping the bank robbery, in return for assuming Diana’s identity. The real Diana Prince promises to write Wonder Woman from South America, and Wonder Woman, now nurse Diana Prince, is finally able to be near Steve...and to save him, shortly afterward, from an encounter with enemy agents.

Appearing in "The Return of Minister Blizzard"Edit

Synopsis for "The Return of Minister Blizzard"Edit

When nurse Diana Prince can’t get Steve Trevor to stop talking about Wonder Woman, she assumes her other identity and is just about to collect a kiss as the park they stand in becomes covered with ice. The cold snap is the doing of Minister Blizzard, a pale-skinned villain with a ray-gun capable of producing cold, heat, magnetism, electricity, and other forces. Wonder Woman is defeated by him in battle and captured, along with Steve, who is frozen solid. Blizzard tells Wonder Woman that his actions are caused by his desire to give Princess Snoweena a gift of Manhattan Island on ice. While Blizzard is speaking, however, Wonder Woman realizes his ray has only made her imagine herself being bound, and manages to free herself. She breaks herself and Steve out of Blizzard’s spacecraft, and, by playing bullets-and-bracelets with the projectiles that Blizzard’s fleet fires, blasts them all out of the sky. Manhattan is rendered ice-free again, and Wonder Woman and Steve Trevor return to it.

Retrieved from "https://heykidscomics.fandom.com/wiki/Wonder_Woman_Vol_1_162?oldid=1468440"
Community content is available under CC-BY-SA unless otherwise noted.