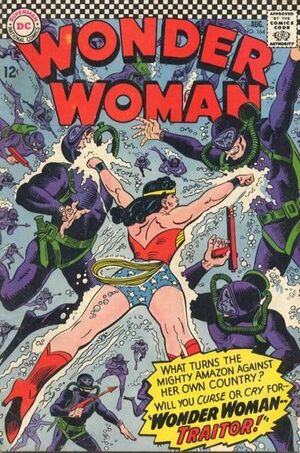 Shortly after Wonder Woman finds out that Gen. Darnell is secretly in love with her, she learns that Steve Trevor has, in Darnell’s words, “recklessly went out to test a new super rocket plane which killed a test pilot who took his place while he was recovering!” Steve also fails to return, and Wonder Woman’s searching can reveal no trace of either him or his plane. Wonder Woman grieves, but Darnell consoles her, and she finally accepts a proposal of marriage from the general. However, she is unable to say the words “I do” at the ceremony, still thinking of Steve, and Darnell releases her from her engagement. The Amazon princess rescues another pilot testing the rocket plane, and takes his place, finding the craft captured by rays fired from a submarine. She battles frogmen from the sub, but finally is overcome, and finds herself encircled by her own Magic Lasso, held by her enemy, Angle Man. The villain forces her to retrieve the weapons that the U.S. uses against him, for resale to criminals. Steve Trevor, a prisoner of Angle Man, misunderstands the lasso’s power over her and calls Wonder Woman a traitor. Finally, Trevor is so angered that he knocks down Angle Man, causing the villain to lose his grip on the lasso. Angle Man jettisons Wonder Woman and Trevor from the ship and sends a torpedo at them, but Wonder Woman deflects it back into the sub, sinking it. Wonder Woman gets herself and Steve to the surface, explains that the Magic Lasso compelled her to obey Angle Man, and kisses him.

Retrieved from "https://heykidscomics.fandom.com/wiki/Wonder_Woman_Vol_1_164?oldid=1468444"
Community content is available under CC-BY-SA unless otherwise noted.