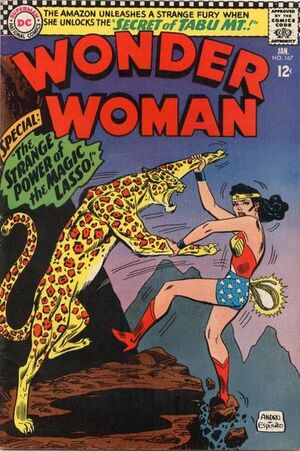 Appearing in "The Secret of Tabu Mt.!"Edit

Synopsis for "The Secret of Tabu Mt.!"Edit

Wonder Woman answers the request of Diana Prince, the woman from whom she took her secret identity, to rescue her fiancé Bill, who has fallen prey to an isolated Inca-like tribe atop Tabu Mountain.

Appearing in "Strange Power of the Magic Lasso"Edit

Synopsis for "Strange Power of the Magic Lasso"Edit

Steve Trevor gains control of Wonder Woman through the Magic Lasso and tries to force her to marry him, but a lot of emergencies get in the way.

Retrieved from "https://heykidscomics.fandom.com/wiki/Wonder_Woman_Vol_1_167?oldid=1468451"
Community content is available under CC-BY-SA unless otherwise noted.