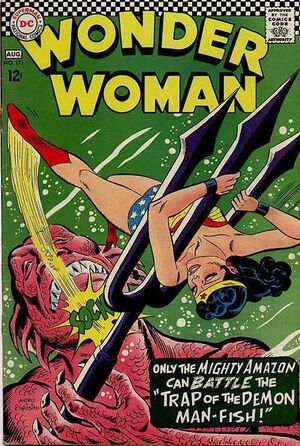 Appearing in "Terror Trap of the Demon Man-Fish"Edit

Synopsis for "Terror Trap of the Demon Man-Fish"Edit

While Wonder Woman is visiting Paradise Island, she and a group of Amazons are netted by Man-Fish, a huge, scaly merman who competes with his brothers to see who can net the perfect catch. Wonder Woman breaks herself, her sister Amazons, and a bevy of mermaids free of his clutches and defeats Man-Fish and his brothers.

Appearing in "Menace of the Mouse Man"Edit

Synopsis for "Menace of the Mouse Man"Edit

Mouse-Man breaks free of his cage with the help of a pack of mice which obey his commands. He leads them and a gang of human crooks on a series of robberies. When Wonder Woman intervenes, she is at first bested by Mouse-Man when he encircles her with her own Magic Lasso, but she eventually frees herself and recaptures the diminutive villain.

Retrieved from "https://heykidscomics.fandom.com/wiki/Wonder_Woman_Vol_1_171?oldid=1468459"
Community content is available under CC-BY-SA unless otherwise noted.