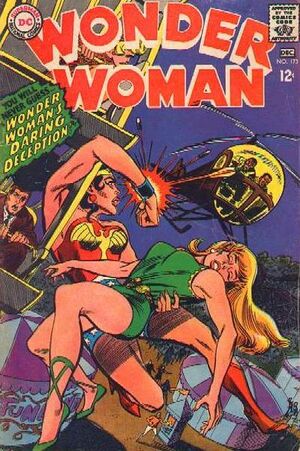 Tonia, an Amazon, creates a power pill that enables her to triumph over the other Amazons in ritual tests of strength and skill. If she passes one of three tests Wonder Woman gives her, she will be allowed to fight crime in Man’s World.

Wonder Woman must go back in time to stop a Martian invasion which, in her own era, has already succeeded.

Retrieved from "https://heykidscomics.fandom.com/wiki/Wonder_Woman_Vol_1_173?oldid=1468463"
Community content is available under CC-BY-SA unless otherwise noted.