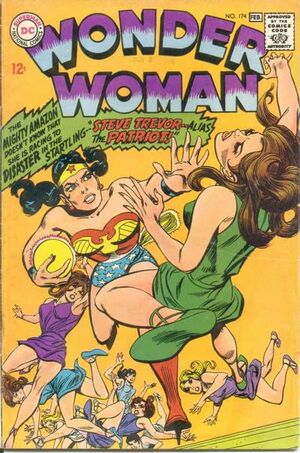 Angle Man robs Wonder Woman of her powers by a ray-device concealed in a camera which one of his henchmen uses to snap her picture. At the same time, he anonymously gives Steve Trevor super-power pills which make him super-strong, super-swift, and resistant to damage. Steve decides to become a super-hero, and takes on the costume and name of The Patriot. Wonder Woman attempts to carry on her career without powers, but is of little use against criminals. Angle Man anticipates that she will give up and marry Steve Trevor, thus taking herself out of the crime-fighting business. But Steve and Wonder Woman figure out the plot, after which Wonder Woman restores her powers temporarily with one of Steve’s pills and both of them capture Angle Man and his gang. The camera’s power-sapping film is destroyed, restoring the Amazon’s powers completely. But she stops Steve from destroying the power pills, saying they may need the services of the Patriot someday.

Appearing in "Wonder Woman vs the Air Devils"Edit

Synopsis for "Wonder Woman vs the Air Devils"Edit

When statues of Superman, Batman, the Flash, and Wonder Woman are unveiled in Washington, D. C., the Wonder Woman statue being made of gold, a villain called the King of Crime takes umbrage and orders his troop of plane-flying henchmen, the Air Devils, to attempt the destruction of the statues. This proves only to be a cover for his snatching the golden Wonder Woman statue and Steve Trevor at the same time. When Wonder Woman tries to rescue Steve, the King of Crime reveals that he has a bomb attached to Trevor, and will set it off if she opposes him. Sadly, the Amazon departs, and later reveals what has happened to Queen Hippolyte on Paradise Island. But she is inspired by a meteor shower to secretly hitch a ride on one of the meteors, guide it to the King of Crime’s island, knock the bomb detonator out of the King’s hand, free Trevor, and capture the King and his gang.

Retrieved from "https://heykidscomics.fandom.com/wiki/Wonder_Woman_Vol_1_174?oldid=1468465"
Community content is available under CC-BY-SA unless otherwise noted.