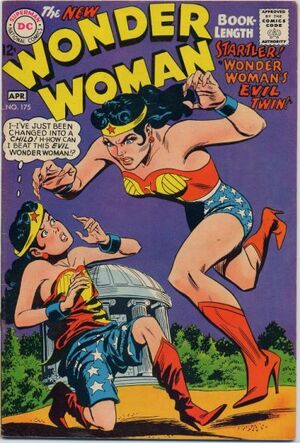 Mr. Gargoyle, a villain whose face has been disfigured in an explosion, forcing him to wear a gargoyle-like mask, tries to force Wonder Woman to love him by capturing both her and Steve Trevor and placing Trevor in a deathtrap. Gargoyle says that he will release Trevor if she will fall in love with him, but, even though Steve is injured during the incident and thinks Wonder Woman has betrayed him when she sees him forced to kiss Gargoyle, the Amazon breaks free and saves both herself and Steve. Wonder Woman heals Steve with the purple ray on Paradise Island. But an evil Wonder Woman from a parallel dimension has seen the incident on a dimensional viewer and comes to Paradise Island, intent on romancing Steve, which she does. Queen Hippolyte declares that the Wonder Women must compete in a tournament for the right to love Steve, and the evil Wonder Woman insists on holding the contest on the Paradise Island of her own parallel world. There, dimensional differences turn Wonder Woman into a young teen who is easily defeated by the evil Wonder Woman. But Steve Trevor is also changed into a teenager, and chooses the teen Wonder Woman for his lover. When Wonder Woman and Steve return to their home dimension, both are restored to their proper age and Steve’s mind is healed.

Retrieved from "https://heykidscomics.fandom.com/wiki/Wonder_Woman_Vol_1_175?oldid=1468467"
Community content is available under CC-BY-SA unless otherwise noted.