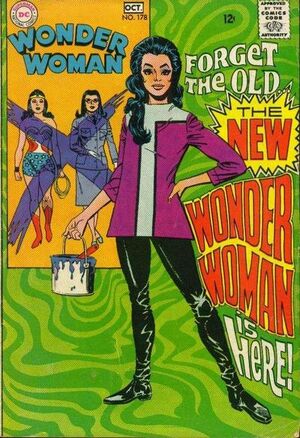 And I'll lose him forever if I don't do something to keep him interested in me! Wonder Woman must change...

After Steve Trevor is wrongfully accused and convicted of the murder of a man who insulted Wonder Woman, Diana Prince undergoes a glamorous makeover so that she can go underground and ferret out the real murderer.

Retrieved from "https://heykidscomics.fandom.com/wiki/Wonder_Woman_Vol_1_178?oldid=1468472"
Community content is available under CC-BY-SA unless otherwise noted.