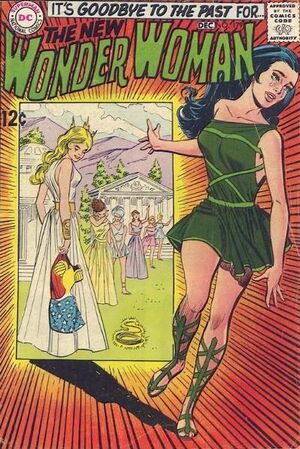 In order to get in contact with the criminal organization headed by the mysterious Dr. Cyber, Steve Trevor is secretly ordered by Gen. Darnell to pose as a traitor. He goes on the run, pursued by the Army and the authorities, with only Darnell knowing the truth. Just as Diana Prince learns of the news, she is summoned back to Paradise Island as Wonder Woman. There Queen Hippolyta tells her that the magic of the Amazons is exhausted after their 10,000-year stay on Earth, and that they must go to another dimension to rest and renew their powers. Wonder Woman refuses to go, saying that Steve Trevor needs her. Thus, she is forced to give up her costume, perform the Amazon rite of renunciation that removes her powers, and return to Man’s World only as Diana Prince. Diana rents a store and apartment, and soon comes upon a blind Oriental named I-Ching whose martial arts skill enable him to defeat three sighted attackers. Ching reveals that he knows she was once Wonder Woman and that he has come there to help her fight Dr. Cyber, whose agents raided I-Ching’s temple for gems and killed his fellow worshipers, and with whom Steve Trevor is now involved. I-Ching trains Diana in karate and other martial arts. But, during one session, a badly-wounded Steve Trevor stumbles into their dojo, having been shot and left for dead by Dr. Cyber’s agents. They learn that Cyber plans to kill congressmen by planting bombs in children’s toys and sending them to the lawmakers. Diana and I-Ching get Steve to a hospital, then seek out Cyber’s agents and defeat them. But Steve remains unconscious and in critical condition at the hospital, and Diana and I-Ching are later stalked by a mysterious man.

Retrieved from "https://heykidscomics.fandom.com/wiki/Wonder_Woman_Vol_1_179?oldid=1468474"
Community content is available under CC-BY-SA unless otherwise noted.