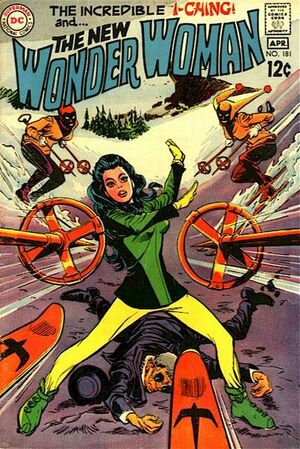 Well, pard-don me, Gramps... but when a miniature A-Bomb is gonna explode under my feet... I tend to worry a mite.

Appearing in "The Wrath of Dr. Cyber"Edit

Synopsis for "The Wrath of Dr. Cyber"Edit

I-Ching hypnotizes Cyber’s agent into revealing the location of her mistress’s underwater fortress. Before they attempt to invade it, Diana goes to Raphael, a reformed criminal armorer, and gets several concealed weapons. Cyber is attempting to recruit Trench to her side, but before he can give an answer, Diana and I-Ching break into the fortress and join Tim in a battle against Cyber and her cronies. Cyber and her gang escape again, with Diana and her friends barely dodging an explosion that destroys the fortress. Later, a clue Tim overheard leads them to the European nation of Bjorland, where they once again discover and battle Cyber and her troops. Cyber dangles a priceless hoard of gems before Tim and offers them to him if he will become her agent and kill Diana and I-Ching. In response, the greedy Tim turns and fires his gun.

Retrieved from "https://heykidscomics.fandom.com/wiki/Wonder_Woman_Vol_1_181?oldid=1468478"
Community content is available under CC-BY-SA unless otherwise noted.