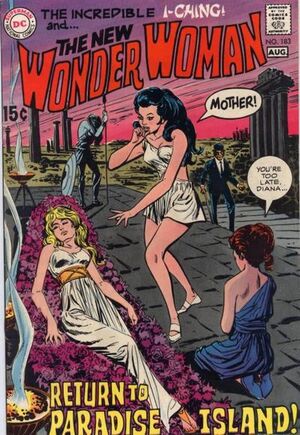 He's right, Ching. I'm only a human now. What chance do I stand against a god?

Appearing in "Return to Paradise Island"Edit

Synopsis for "Return to Paradise Island"Edit

The Amazon emissary locates Diana and I-Ching, who has followed her, and brings them both across dimensional barriers to the land where Paradise Island now exists. The land is ravaged by war, and Queen Hippolyte lies comatose and tormented. An Amazon reveals that Ares, his sister Eris, and his sons Diemos and Phobus came to Hippolyte and demanded the secret of dimensional travel so that they could travel to Earth and plunge it into bloody war. Hippolyte refused, and battle ensued, in which the Amazons were defeated. But Hippolyte still withheld the secret, whereupon Eris cursed her with a nightmare sleep that would only end when her secret was wrested from her. Now Mars appears to Diana and tells her that she can end her mother’s suffering by asking her to reveal the secret. But Hippolyte, even in sleep, grasps Diana’s hand, signifying her answer is still “No”. When Mars and his family attempt to kidnap Hippolyte, the Amazons surround their queen and prevent it. Mars withdraws, promising to return with troops. Diana rallies the Amazons to fight at her side against their foe, which outnumbers them five to one. Diana later dons battle armor and leads the Amazon army against Deimos’s and Phobus’s Beast Men, during which battle the enemy snatches Hippolyta. The Amazons recover their queen in a raid led by Diana, and they withdraw to a mountain pass where they intend to make their last stand against Mars’s troops.

Retrieved from "https://heykidscomics.fandom.com/wiki/Wonder_Woman_Vol_1_183?oldid=1512249"
Community content is available under CC-BY-SA unless otherwise noted.