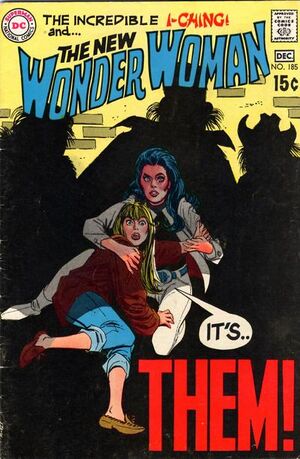 Diana finds that the girl, Cathy Perkins, is hiding out from a trio of women whose leader, Top Hat, seeks to bring her back as a collared slave. Diana beats all three of them up and throws them out. Later, Diana learns that Cathy is a runaway who fell into Top Hat’s hands and was reduced to servitude by her, before she pulled off an escape. Top Hat attempts to terrorize Cathy and Diana, even firebombing Di’s boutique. Eventually, Diana and her newfound ally, Tony Petrucci, whose sister Angela was victimized by the villains, have a showdown with Top Hat and her gang, defeat her, and have her jailed for a jewel robbery. Diana reunites Cathy with her parents and floats to them the idea of making Cathy her employee at the boutique, which is accepted. At that point, I-Ching walks in.

Retrieved from "https://heykidscomics.fandom.com/wiki/Wonder_Woman_Vol_1_185?oldid=1468485"
Community content is available under CC-BY-SA unless otherwise noted.