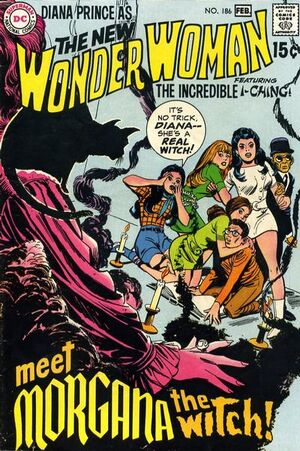 Appearing in "Morgana the Witch"Edit

Synopsis for "Morgana the Witch"Edit

Diana introduces I-Ching to all her new friends. The next day, she receives a substantial reward from Mr. Smithson, the victim of Top Hat’s jewel robbery, and uses it to rebuild her boutique in great style. Cathy Perkins has three friends in trouble, though, and brings them to Diana to seek help. One of those friends, a boy named Henry, has been turned into a frog. Henry and the girls explain that he performed a magic spell from an old book and liberated a sorceress named Morgana into their realm. When he sought to send her back, Henry was transformed by her into a frog. Diana, Cathy, I-Ching, Henry, and the girls locate Morgana in town, causing mostly harmless chaos to amuse herself. Morgana is amused by Diana’s challenge, and holds her own with the heroine in a hand-to-hand fight. But when the sorceress attempts to use a spell against Diana, I-Ching, who has studied magic, uses a counter-spell to stop her. After another brief brawl, in which she defeats Diana, Morgana takes her leave...and Henry is still a frog. I-Ching tries other spells on him, but none work. Finally, Cathy hits on the idea of having Abbie, Henry’s girlfriend, kiss him. The ploy works, and Henry becomes a human again.

Retrieved from "https://heykidscomics.fandom.com/wiki/Wonder_Woman_Vol_1_186?oldid=1468487"
Community content is available under CC-BY-SA unless otherwise noted.