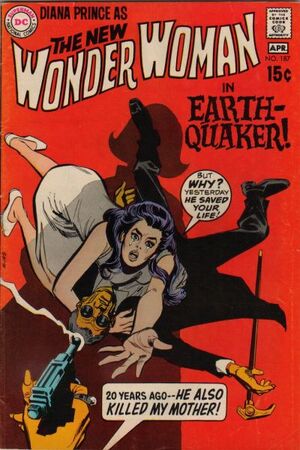 This is ridiculous! I've called every airline-- and I cannot get a seat! The whole country seems to be going to Hong Kong today.

I-Ching receives a call from an old friend in Hong Kong, asking for help. The only plane he and Diana can charter for the flight is owned and flown by another of Ching’s old friends, Patrick McGuire, who is also carrying a lady named Lu Shan to Hong Kong. During the flight, members of the Tiger Tong criminal clan emerge from crates in the cargo hold and attempt to take over the plane, but are repelled by Diana and her friends and accidentally thrown off the plane. Lu Shan says that the Tiger Tong were trying to get her “employer’s” treasure, but I-Ching, feeling half of a shattered gem on a ring on Lu Shan’s finger, has Diana fit it together with another half-gem he carries on a chain around his neck. By this token, he knows that Lu Shan is really his long-lost daughter. Diana, I-Ching, Lu Shan, and Patrick are attacked again by the Tiger Tong in Hong Kong. Lu Shan finally takes her three newfound acquaintances along with her, to deliver her “treasure” to her employer--Dr. Cyber. Cyber opens the crate Lu Shan has brought to her, and explains that the devices within will power the Earthquaker devices that will cause earthquakes that will destroy Hong Kong. Then, she says, she will blackmail the world with threats of further earthquakes. After gaining Dr. Cyber’s permission, Lu Shan shoots I-Ching. Diana, aghast, asks how she could shoot her father. Lu Shan says that it is because he murdered her mother twenty years ago. Dr. Cyber kills the Tiger Tong members who helped her during the operation, but one of them survives long enough to blast a brazier at Cyber’s side,sending a rain of red-hot coals into her face. Lu Shan gets Cyber to safety, but her face is horribly disfigured. Diana manages to rescue herself and gets I-Ching to a hospital. Later, recuperating, Cyber orders Lu Shan to activate the Earthquakers, and send death squads after Diana Prince.

Retrieved from "https://heykidscomics.fandom.com/wiki/Wonder_Woman_Vol_1_187?oldid=1468490"
Community content is available under CC-BY-SA unless otherwise noted.