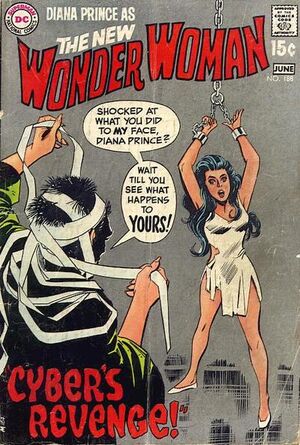 While Diana Prince is consulting with Inspector David McLean of the Hong Kong police, the island is rocked by an earthquake. She and Patrick investigate outside once the tremors stop and find Lu Shan and some of Dr. Cyber’s gang attacking them, but they elude the assassins. Dr. Cyber, safely off of Hong Kong, broadcasts a blackmail message demanding she be made ruler of Earth, with the world to be leveled by earthquakes as an alternative. Diana is found by Cyber’s killer squad, but she defeats them and forces one of the women to tell her where the Earthquakers are. All but one of the Earthquakers are shut down. At the last Earthquaker locale, both Diana and Patrick are captured and chained up by Dr. Cyber, who forces Diana to look upon her ravaged face. But Diana kicks Cyber unconscious, manages to pull her chains out of the wall, and frees Patrick with a key found on Cyber. The villainess revives and tries to attack Diana with a sword, but Diana knocks her into a high-voltage wire, electrocuting Cyber and causing the final Earthquaker to explode. Diana and Patrick manage to escape. Lu Shan, who also reaches safety, vows vengeance for her mistress. Later, Diana and Patrick learn that Lu Shan has gone into Red China, and I-Ching has gotten out of his hospital bed and followed her there.

Appearing in "Crime Does Not Pay!"Edit

Synopsis for "Crime Does Not Pay!"Edit

While shopping for perfume, Diana Prince nabs pickpocket Creepy Caniguh and his partner.

Retrieved from "https://heykidscomics.fandom.com/wiki/Wonder_Woman_Vol_1_188?oldid=1468492"
Community content is available under CC-BY-SA unless otherwise noted.