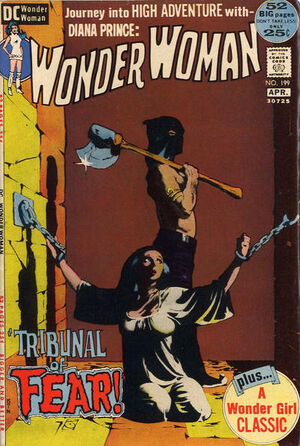 Appearing in "Tribunal of Fear"Edit

Synopsis for "Tribunal of Fear"Edit

Diana encounters Jonny Double, a private detective who prods her into a fight (which she wins) to test her prowess, and then offers her a job. Double is currently employed by nightclub magnate Fellows Dill, the “dean of beautiful women”. A fanatic religious / moralist organization called The Tribunal is out to murder him for his embodiment of values with which they disagree. He feels that The Tribunal’s assassins will be on the lookout for male bodyguards like Double, but not for a beautiful female like Diana. At first she refuses his offer, but when Dill offers to finance an operation that will return I-Ching’s sight, she agrees. The Tribunal strikes while Dill, Diana, and Double are travelling on a private train car, gassing both Diana and Double unconscious, though Dill escapes. Diana and Double are placed on trial by The Tribunal’s hierarchy, and are condemned to death for their involvement with Dill. Jonny offers to bring back Dill in exchange for their lives, with Diana staying as a hostage. The Tribunal agree, with a three-day deadline. When three days pass without Double’s return, an executioner is sent to Diana’s cell, but she knocks him unconscious, takes his keys, and frees herself. She fights her way past guards and, seeing Tribunal members with Double in tow, takes a guard’s robe and follows them in disguise. Double admits to The Tribunal that he was unable to find Dill, but offers himself as sacrifice in place of Diana. Diana attacks the guards and she and Jonny make an escape from The Tribunal’s stronghold. Minutes later, Jonny and Diana are about to share a kiss when Double is grazed by a gunshot. The gunman is Fellows Dill, holding a pistol, with an insane look on his face.

Appearing in "The Battle of the Mer-Men"Edit

Synopsis for "The Battle of the Mer-Men"Edit

Retrieved from "https://heykidscomics.fandom.com/wiki/Wonder_Woman_Vol_1_199?oldid=1468514"
Community content is available under CC-BY-SA unless otherwise noted.