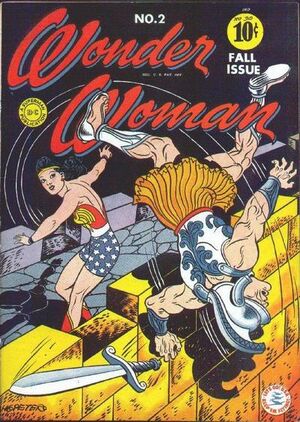 When Wonder Woman's astral form traveled to Mars to rescue Steve Trevors, Deception recognized her and revealed her identity to Mars after she won in the arena. He gives advice to Mars to pretend not to know who she was to trap her. However Wonder Woman was able to rescue Steve, overcome Mars and his soldiers, and escape to Earth. Charged with the capture of Wonder Woman first out of Mars' lieutenants, Greed set in motion an elaborate plan that included inspiring Hitler to raid hidden gold hoards of the American treasury. He also inspired President Deacon of Holliday College to kill the school treasurer and steal school funds, imperiling the school's future and making the treasurer suspect until Wonder Woman entered a charity baseball game. He has plans to kill Wonder Woman at the game with an explosive baseball. After being hit by it she is drugged and taken to a hospital. The Nurse is bound and gagged by Greed's accomplices and Wonder Woman imprisoned in a gold block. However the Nurse is able to remove her gag and uses a telephone to alert the authorities. Greed's plot to use Holliday College as a base of operations for steal from the American treasury and sending the gold to Mars is foiled. The Earl of Greed's spaceship was destroyed and he fled to Mars on a slave-ship, hoping to avoid the God of War. However he was seen and sent to the dungeons.Deception was the second of Mars' lieutenants sent to capture Wonder Woman, refusing at first as he said his servants were writing propaganda for the Nazis and Japanese and he could not capture Wonder Woman without their help. Wonder Woman was captured by an agent of his Naha with her magic lasso after being given a fake lasso. She was taken onto a ship where she was left bound hand and foot, along with being gagged and blindfolded with plaster. However Wonder Woman was able to escape with the help of Etta Candy who she telepathically contacted. Deception tried to convince Hirohito to cause more war in Hawaii by disguising himself as a General. However Wonder Woman foiled his plan to cause further war with the help of Etta Candy and sent his phantom form fleeing back to Mars in the form of a slave girl after wrecking his ship. He was then imprisoned by Mars, his imprisonment causing Hirohito to speak truthfully to the Italian Ambassador. Lord Conquest was the last of Mars' lieutenants sent to capture Wonder Woman. He refused at first, claiming it was beneath his dignity. He inspired Mussolini to send agents to America to capture Wonder Woman. Italian agents Count Crafti (alias Don Unaldi, Spanish nobleman) and giant slugger Mammotha were dispatched, with Conquest possessing Mammotha. After luring Wonder Woman into entering the boxing ring with Mammotha and then submitting her to enormous electric shock when she was collecting $50,000 for defeating Mammotha, Conquest prepared to deliver her and Steve Trevor, who had been knocked out when trying to see Wonder Woman, to Mars. He chained them both, weakening Wonder Woman as if an Amazon's bracelets were chained together by a man she became as weak as an ordinary woman. She was taken to Mars' dungeon. Greed and Deception were released while Wonder Woman was imprisoned in the dungeons. However with the help of Etta Candy's spirit form who has brought 'astral acid' after Wonder Woman telepathically contacts her, Wonder Woman was able to escape and overpower Mars, whose Iron Palace was destroyed by his weapons, though he survived. http://www.dcindexes.com/indexes/indexes.php?character=75&choice=appearances] plot summary at dcindexes.com

Retrieved from "https://heykidscomics.fandom.com/wiki/Wonder_Woman_Vol_1_2?oldid=1484552"
Community content is available under CC-BY-SA unless otherwise noted.