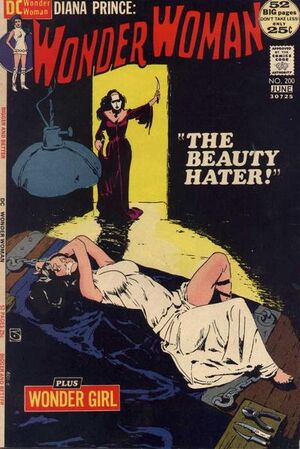 Appearing in "The Beauty Hater"Edit

Synopsis for "The Beauty Hater"Edit

Diana knocks Fellows Dill down and Jonny Double takes his gun. Dill proves to be insane, and they trail his footprints to what appears to be a cabin in the mountains, but what is in reality the anteroom of a fabulous hideout burrowed into the mountain. Two Tribunal members appear in a helicopter. Jonny and Diana defeat them and take their craft, but soon find that the controls are locked on it and it flies them by remote control to Fellows Dill’s estate. Once there, they are attacked by members of Dr. Cyber’s gang. Jonny is subdued, and Diana vaults inside the mansion, falling through a trapdoor into a dungeon full of beautiful women. Diana realizes that Dr. Cyber is behind the caper, having recognized Cyber’s insignia on her gang members. But Cyber knocks Diana unconscious with electric bolts from a device in the ceiling. Diana awakens to find herself chained beside Jonny, with a steel-masked Dr. Cyber sizing them both up. Cyber tells them that she escaped the destruction of her undersea fortress through a safety route, rebuilt her organization, admittedly “was mad”, and “established The Tribunal to destroy all who trafficked in human beauty!” Then she discovered a mind-control serum, which she used on Dill. Now, her objective is to have her brain transplanted by her associate Dr. Moon, late an ally of Ra’s Al Ghul, into the body of a beautiful woman. The lovely captives Diana saw were candidates for Cyber’s new housing. Now, she admits she wants to be housed in Diana’s body.

When Moon administers anesthetic gas to Diana, she suspends her breathing by yoga techniques and remains awake, faking unconsciousness. Then she attacks Cyber and her guards, and, when Cyber attacks with a scalpel, judo-tosses her. Cyber impales herself on the scalpel. Diana frees Jonny, and they embrace, ready to leave.

Diana Prince and I-Ching watch children playing a game of tug-of-war, and Diana remembers a time in which she played tug-of-war, with herself as the rope between Mer-Boy and Bird-Boy. The story itself is a non-canon Wonder Woman Family tale, reprinted from Wonder Woman #144.

Retrieved from "https://heykidscomics.fandom.com/wiki/Wonder_Woman_Vol_1_200?oldid=1468516"
Community content is available under CC-BY-SA unless otherwise noted.